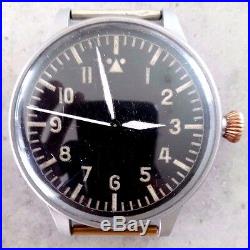 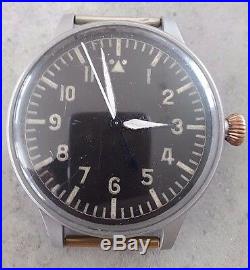 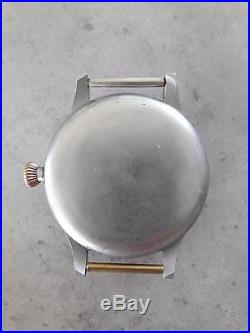 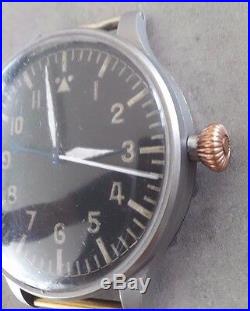 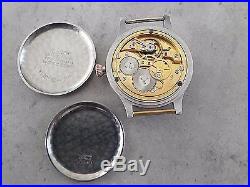 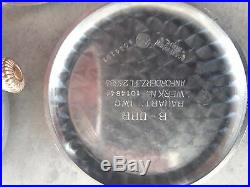 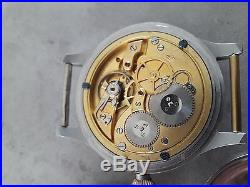 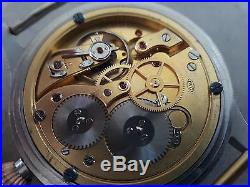 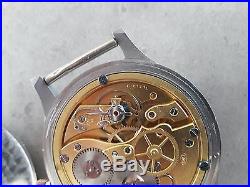 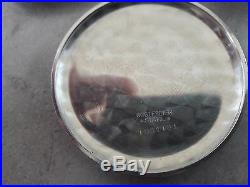 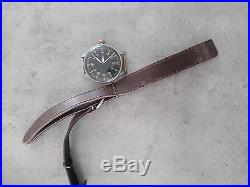 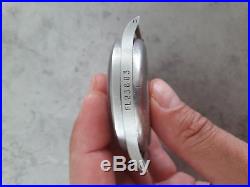 That watch runs and keeps good time. It is all original with some minor repairs (see below).

The hands have been touched by paint at some time, very possible during the war to improve in flight visibility. One of the spring bars original, one a later replacement.

Included is the large brand new band , historically correct. The high grade movement looks practically brand new. Overall, amazing condition for the age. The watch is signed on the case twice, and on the movement. A great addition to any collection , and a fantastic investment - the most sought for of the beobachtungsuhr, made only in 1200 pieces with most lost in the war.

Please see the pictures they are part of the description! There are some watch designs that not only stand the test of time, but also transcend their original context to become a classic. In 1935, Adolf Hitler announced his plans to reconstitute Germanys Air Force and officially created the Luftwaffe.

The original design drawing The bomber crew synchronizing their B-uhrs. The size accommodated large hand-wound movements typically used in pocket watches, but the B-Uhr was always to be a watch for the wrist.

Each one used a Breguet balance spring. Inside, the movement was surrounded by an iron core, making the B-Uhr anti-magnetic a must for aviation.

To correct for time discrepancies, the movements were capable of stopping the central seconds hand by pulling the crown, or hacking, and the oversized diamond or onion crown could be operated with gloves on the hand. A very long, double-riveted leather strap, long enough to go over the leather flight jacket, held the B-Uhr in place.

Photo from GERMAN MILITARY TIMEPIECES of WORLD WAR II. The large size made them unambiguously legible and their black dials with white Arabic numerals further aided the task of precise reading. The flame-blued sword hands were covered in luminous material as was the distinguishing upwards-orientation triangle or arrow at the twelve oclock position, accompanied by two dots on the Type A models. The initial Type A model had only an outer chapter ring, but the later type B (starting in 1941) had an outer ring for minutes/seconds and an inner ring for hours. Each case had FL23883 engraved on the left side.

FL designated flieger, and 23 identified the watch as a navigation watch. B-Uhren is an abbreviation for Beobachtungs-uhren, literally Observation watches. B-Uhr is singular, and B-Uhren is plural.

The B-Uhren were property of the Luftwaffe, not the navigators. Navigators received a signal beep from the airbase, which in turn set its chronometer to the standard time of the German Naval Observatory (Deutsche Seewarte), and if the navigators time was off, the hacking mechanism allowed for adjustment. An accurate watch was necessary for navigation, so all the B-Uhren watches were regulated and tested to the highest chronometer standards of the Deutsche Seewarte in Hamburg.

Bomber navigators peered over the navigation table, their B-Uhren at the ready, and plotted course, copied astronomical fixes and noted events on the map. The B-Uhr was a consummate navigational aid. Five manufacturers four German and one Swiss supplied the B-Uhren.

5 the only two companies to use in-house German movements. To meet demand, Lange also sent ébauches and cases to a variety of other manufacturers for assembly and regulation. In smaller numbers, the Swiss International Watch Company IWC who supplied watches to both Axis and Allied forces, manufactured the B-Uhr cal. After you get your watch, take good care of it - it will probably need adjustment, and it will need regular service - once in every 2-3 years if you use it daily. Please, do not play tennis or golf in it - use your Rolex for that instead : Do not expect quartz accuracy from mechanical watches.

Please, pay within 3 days of winning. The item "IWC luftwaffe original big pilot beubachtungsuhr very rare and collectible" is in sale since Sunday, July 2, 2017. This item is in the category "Jewelry & Watches\Watches, Parts & Accessories\Wristwatches". The seller is "stimson70" and is located in Prague.