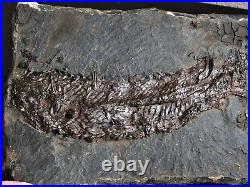 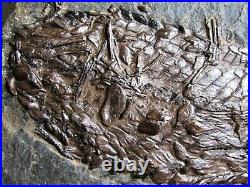 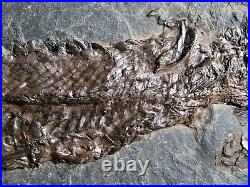 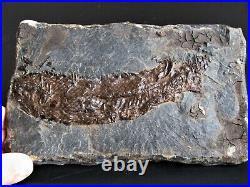 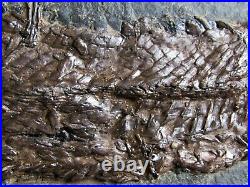 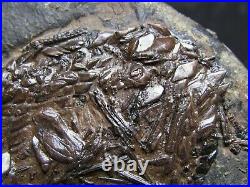 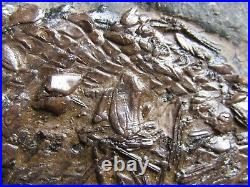 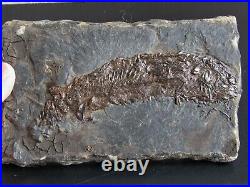 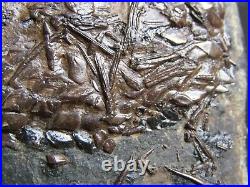 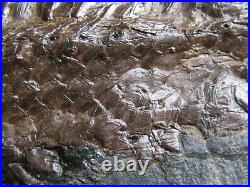 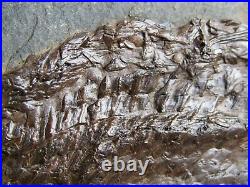 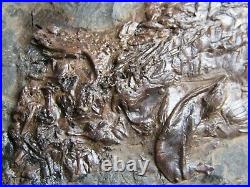 Although, as with the fossils of this deposit, it had to be transferred to a resin matrix in order to be preserved, the extraction method is explained below. It belongs to an old collection from many decades ago, since today it is a protected site, in which non-scientific extractions are not possible. Size Fossil: 17 cm matrix : 22 x13 x 1,5 cm. Is an abandoned quarry in the Sprendlingen Forest, on the outskirts of the town of Messel, Germany.

In the past (until 1971) oil shales - which make up the sediments where fossils are found - were exploited in order to obtain oil. The place has a great geological and, mainly, paleontological importance due to the multitude of fossils that have been found in an exceptional state of conservation. The site originated in the Middle Eocene, in a maar formed after a phreatomagmatic eruption. The ancient lake sediments of that maar, silts and clays with abundant organic matter, today bituminous shales, have preserved plant remains and thousands of very well preserved fossils of insects and fish, as well as numerous complete skeletal remains of reptiles, birds and mammals. In some cases, impressions of feathers, fur, skin, stomach contents, etc. Are preserved, in addition to remaining in their natural form, without having dispersed the parts of the corpse. It was declared a World Heritage Site by Unesco on September 9, 1995. Due to the ephemeral nature of oil shale, Messel fossils cannot be easily preserved. These sediments that the fossils carry are composed of more than 40% water and when they dry they completely crumble, which makes it necessary to use some preparation method. Some cracking of the finer parts occurs very soon (within minutes), while entire layers bearing fossil materials can be completely detached in a matter of a few hours. All scientists working at Messel immediately save their findings in water, pending of this special preparation. Then we proceed with a method of transfer to an artificial support. One side of the fossil is first left free, to which a plastic material (artificial resin) is applied. When this plastic resin has hardened, the other part is exposed and the oil shale is completely removed. Thus, the pieces can be preserved permanently. Sometimes the person who prepares them simply leaves them the transparent color of the material, other times he dyes them with the natural colors (slate gray) of the shale that originally carried them, or he proceeds according to his own aesthetic preferences. The item "PLATE WITH ULTRA RARE BIG (17cm) FISH FOSSIL. Nº22" is in sale since Saturday, December 26, 2020.

This item is in the category "Collectibles\Rocks, Fossils & Minerals\Fossils\Vertebrates\Bony Fish". The seller is "trilospal" and is located in Palencia.