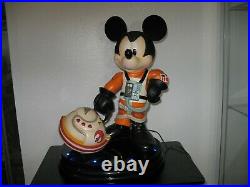 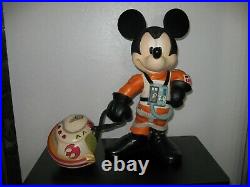 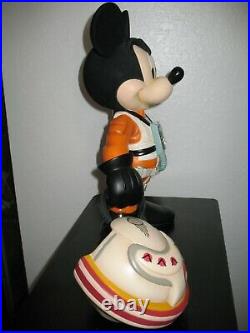 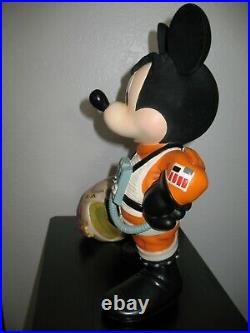 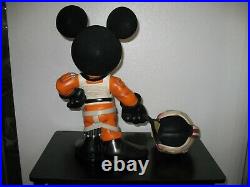 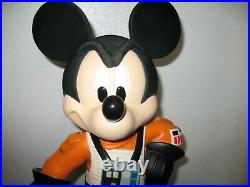 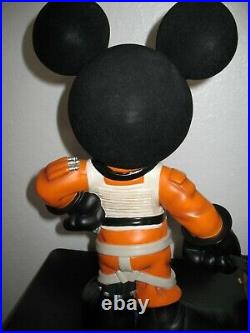 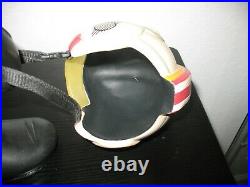 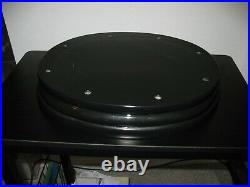 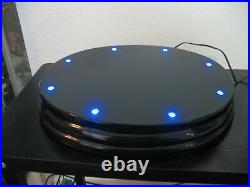 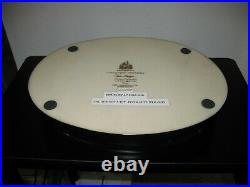 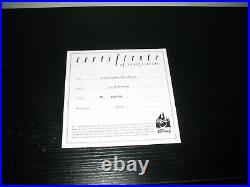 Up for sale is a limited edition #490/600 Mickey as an X-Wing Fighter Pilot Star Wars Big Figure from Walt Disney World's Star Wars Weekends Event in 2007. In this classic Big Fig rendition, Mickey Mouse is dressed as an X-Wing Fighter Pilot as seen during the heroic attack on the Death Star in A New Hope. This figurine debuted at the Star Wars Weekends event at Disney's MGM (Hollywood) Studios in the summer of 2007 in celebration of the 30th anniversary of Star Wars: A New Hope. There were four figures in the 2007 Star Wars Weekends Big Fig set; Mickey is the first and was released June 1, 2007, for the first weekend of the event.

Created by Disney Design Group artist Costa Alavezos, this figurine consists of a hand painted, oversized resin sculpture. And separate helmet sitting on a LED lighted oval base, which gives off an impressive blue glow. Mickey's ears are covered with a plush velour material.

On the back of the base, there is a switch to turn the LED display on and off. The helmet measures 6" x 5" x 6 and the oval base measures. There is some minor wear on Mickey's felt covered brow and minor scuffing on the base. Please see photos for reference. All items pictured are included. Any Star Wars or Disney fan won't want to miss the opportunity to own one of these classic Star Wars renditions! Included is a certificate of authenticity, black LED light up display base with power cord, Mickey as Xwing Fighter Pilot statue, and Mickey's Xwing Pilot helmet. The item "RARE 2007 Star Wars Weekends Mickey as X-Wing Fighter Pilot Big Fig #490/600" is in sale since Sunday, November 8, 2020. This item is in the category "Collectibles\Science Fiction & Horror\Star Wars Collectibles\Other Star Wars Collectibles". The seller is "carniudex" and is located in Gainesville, Florida.