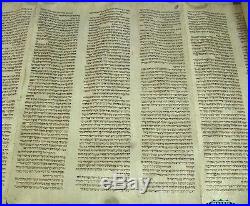 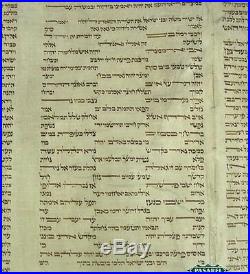 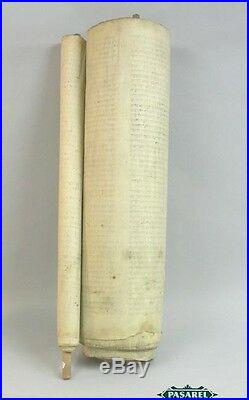 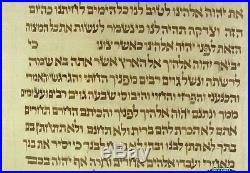 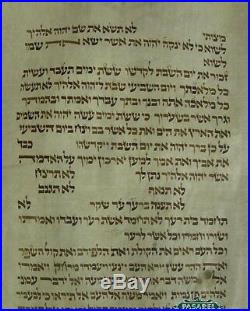 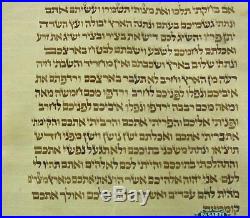 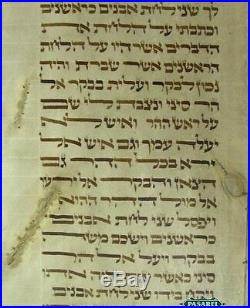 Text height - 60cm / 23.6in. Square Ashkenazi script (Bet Yosef). The bibliographic sources for the structure of the regular letters are works of Yom Tov Lipmann Muhlhausen XV sec. And Samson ben Eliezer, author of the Baruch she-Amar (XIV) where are described the forms of square Ashkenazi letters.

These indications were transferred also in best known works of Yosef Caro Bet Yosef. Other Ashkenazi halakhists, such as Jacob Moelin (Maharil) and Jacob Landau (Sefer ha-Agur), Solomon Luria (Maharshal), and Elijah Shapira would incorporate Samson's teachings into their own works, the Halakhic mainstays of Ashkenazi Jewry. The structure of the Alef and other letters seems to be similar to that of the 16-17 century.

The structure of the letter is interesting because they aren't strong defined as Ashkenazi and have tracks of Sephardic features. It is an important indication that the scroll could be copied in a place influenced by Sephardic culture and rites or where have developed communities of both traditions. Song of the sea The column of the Song begins with the letter "He" as sentenced by some middle age Rabbis as Yizhaq of Corbeils XIII? Or Mordekhay ben Hillel XIII?

In our scroll the letter is written bigger than the others. The layout of the song is based on ancient Ashkenazi tradition, with the last line that doesn't open with the word "Ha-yam", but it doesn't fit with the early layout of the Middle Age.

There is double space between the verses. Besides the regular Tagin on the letters Ã? Â¥, apprantly The scroll doesn't have added tagin. In addition figures many spirals and wrapped letters, in particular, "Peh". The textual characteristics of this scroll, including the script itself, the large columns, the application of "strange letters" place the present scroll squarely in the early modern age. Petuchot and setumot according to Rambam. Very good condition, well preserved, few erased letters, the scroll has some original tears, where it can possible to see the stitches made during the tanning of the parchments. Pasarel offers a diverse, quality selection of items from a wide variety of interests and periods. Ranging from jewelry to antiques, brand new to centuries old, we pride ourselves on having something for everyone.

Our jewelry collection features our in-house jewelry designer, the renowned and acclaimed Billy Shmerling Sender. In addition we also carry numerous pieces of jewelry from different designers, brands and of various ages. The Judaica section is unparalleled in terms of quality and rarity. Located in Israel we have the added benefit of a close relationship with the Judaica world, providing access and insight only few are privy to. Whether you are a collector, dealer, enthusiast or simply a casual shopper, we are confident that you will find something to your liking in our collectible and silver sections.

The eclectic collection will find common grounds with even the most unusual of interests. In the rare case you do not find what you seek, feel free to write us and inquire.

We guarantee lightning speed replies and an attentive ear. Israeli buyers to pay the current 17% VAT.

We guarantee the items we sell are as described. We do not take responsibility for any personal or third party losses. At Pasarel, we are committed to providing the best possible on-line shopping experience. That includes a guarantee of excellent customer care even after your order has been delivered. We encourage you to write to us if you have any questions, requests or suggestions.

When inquiring regarding a specific item please include the item number in the subject line. The item "Rare & Important Big Complete Torah Scroll On Parchment Germany Ca 1600 Judaica" is in sale since Monday, February 2, 2015. This item is in the category "Collectibles\Religion & Spirituality\Judaism\Books". The seller is "pasarel" and is located in Netnaya. This item can be shipped worldwide.