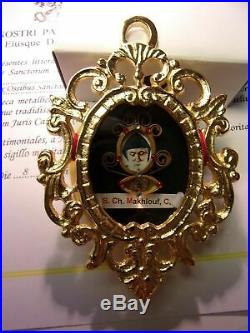 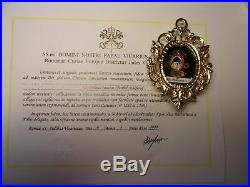 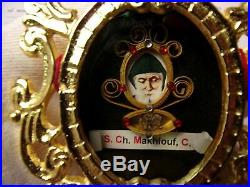 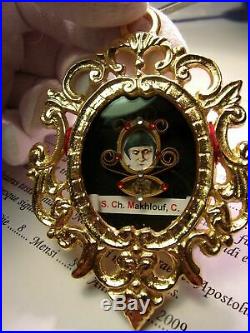 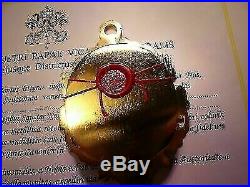 Reliquary Relic 1st Class St. Seal and document is intact. These are hand made so some might be slightly different then others. History Most of us are familiar with European saints, such as St. Less well-known, but still popular in his own area, is Saint Charbel, a monk from the Lebanon who lived much of his life quietly as a hermit, achieving fame only after his death. Charbel Makhlouf was born on. In the high mountains of. His parents were poor but religious, and their fifth child was attracted at an early age to prayer and solitude. In spite of the opposition of his family, he left home at the age of twenty-three and entered the Monastery of St.

Maroun at a place called Annaya. Ordained priest in 1859, he spent sixteen years there before receiving permission from his reluctant superiors to retire to the nearby hermitage of Saints Peter and Paul.

It had taken over seven years for his wish to be granted. Only exceptional monks were allowed such a privilege. A sign that he was ready to leave the secure environment of the monastery came about in a strange way. Given a request to prepare an urgent report, Charbel sat down at night to work on it. To his dismay he found his lamp had run out of oil. He asked one of the monasterys lay servants to fill it for him. By way of a joke the servant filled it with water, but was amazed to see that the lamp lit up immediately and continued to burn brightly. When advised of this, removed the lamp to check it for himself.

To his amazement he found it was indeed full of water. He took this as a sign from above that Charbel was ready to live the severe life of a hermit. For the remaining twenty-three years of his existence Charbel lived an extremely hard life, one of severe mortification. He wore a hair shirt, slept on a straw mattress with a plank for a pillow, and for his one meal of the day was content to eat the meagre left-overs from the monastery. He displayed a remarkable devotion to the Eucharist, spending hours in preparation for saying Mass and hours in thanksgiving afterwards.