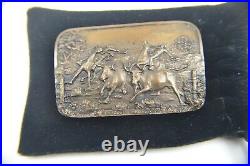 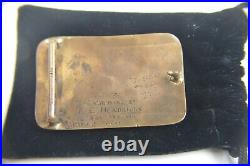 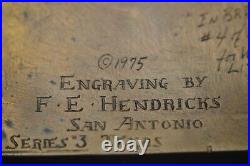 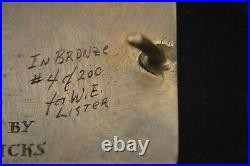 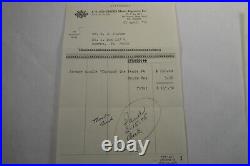 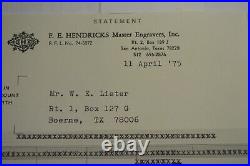 Frank Hendricks Buckle "Through The Fence" # 4 Made For "Big Bill Lister" engraver, artist and country western singer, guitar player. Big Bill Lister turned his early 1950's stint as Hank Williams' opening act and rhythm guitarist into several hits when he recorded versions of Williams' songs, "Countryfied, " "The Little House We Built Just Over the Hill, " and, most memorably, There's a Tear in My Beer. His skill as a performer kept his career afloat long after he stopped producing hit songs, and his honky-tonk style drew from across the country spectrum. His somewhat raw sound may have kept him from being a commercial smash, but his nearly 50-year career kept soldiering on anyway. These Frank Hendricks belt buckles are the Mona Lisa's of western art belt buckles. You can Google Frank Hendricks for more information on one of the most famous engravers of the world. Frank is responsible for many famous guns and rifles. Big Bill worked with Frank Hendricks and his son Weldon is a master engraver and a famous engraver also.

Big Bill Lister had many talents beside engraving. Please Google him also for much more information. I will list these through December 1st 2018 then back to the safe their home. This buckle come with the original bill of sale.

I will deliver within 50 miles of zip code 78258 San Antonio, TX. Hendricks has been one of the worlds top ten gun engravers for more than 50 years. Back in the 1970's Frank engraved several belt buckle designs based on Fredrick Remington, Charles Russell and his own designs.

The buckles are negative engraved into bronze dies and are created by the lost wax method in three metals, bronze, sterling silver & gold. Each buckle is part of a limited series, the quantities vary from 200 to 400 pieces and are signed and numbered by Frank with, "Made Especially For'your name" on the back. FYI this buckle in gold sells for 18,000-20,000, in silver 4,500-5,500. Please look at my other auctions for some other fine items. This item is in the category "Collectibles\Cultures & Ethnicities\Western Americana\Belt Buckles". The seller is "tnttucker" and is located in this country: US. This item can be shipped to United States.